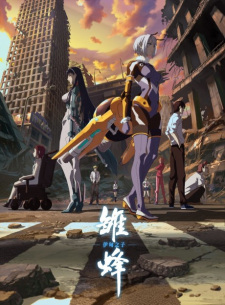 Plot Summary: Ordinary high school student Haoxuan Sun was taken hostage in a seemingly robbery and rescued by a girl wearing winged battledress with bee bionics designs. Haoxuan Sun’s peaceful life was stirred by the girl – human bioengineering weapon Vanguard Liuli. Discovered that he is the "Son of Eden" wanted by all the great powers, Haoxuan Sun and Liuli have been searching for the truth and fight against the so-called destiny. At the same time, people around Haoxuan Sun, senpai Ye Bai who he has a crash on, his best friend, and many others, were discovered to have a second identities. The new BEE anime is based on the original manga plot. In addition, BEE manga's author Baimao personally joined the production team. The new BEE will also include two subplots entirely new to the viewers.