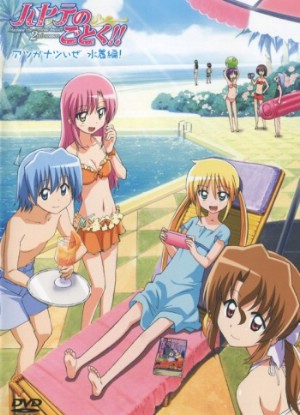 Plot Summary: Abandoned by his parents and given a monumentally large debt as a Christmas present, 16-year old Ayasaki Hayate is at the lowest point of his life. Desperately trying alter his hapless fate, he decides to kidnap someone to hold for a ransom. Due to an ill choice of words, the girl he tries to kidnap misunderstands the action as a confession of love. His plan is totally crushed when he gives his real name out. Realizing his wrongdoing, Hayate proceeds to rescue the girl from the yakuza, who had instead kidnapped her. The girl, as a token of thanks, offers Hayate a job as her butler. Hayate, overwhelmed by her kindness, vows to protect her even at the cost of his life. 16-year-old Hayate is really down on his luck. His unemployed parents are good-for-nothings who waste the money they have on gambling. One day, his parents have racked up a huge gambling debt that they had to sell Hayate to the yakuza for the value of his organs. In a desperate attempt to avoid that fate, Hayate decides to become a “bad guy” and kidnap someone to be held for ransom, but his efforts to do so are mistaken as a confession of love by the girl he targets.